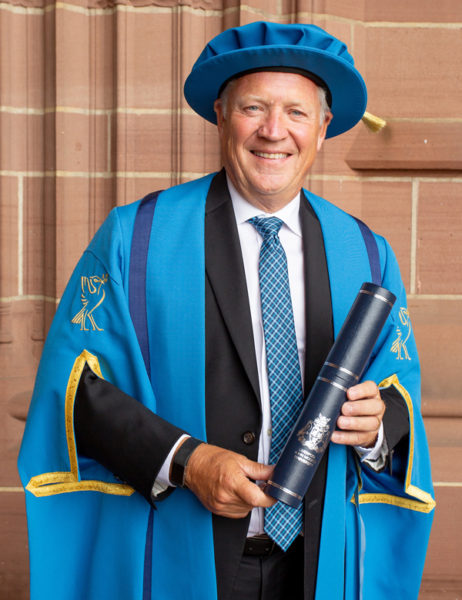 Steve Burrows, CBE, PE, CEng, FICE, FASCE, MIStructE, LEED-AP recently returned to his university alma mater, Liverpool Polytechnic located in Liverpool, England, to receive the school’s highest award, the Honorary Fellowship of Liverpool John Moores University, given to him in recognition of his outstanding achievements in engineering. Steve graduated from the school in 1982 where he studied for his first degree in Civil Engineering.

With more than 30 years of experience in engineering buildings around the world, Steve has helped create some of the world’s most high-profile structures including the Birdsnest Olympic Stadium in Bejing, Apple’s new headquarters in California, Stanford’s Graduate School of Business, and the City of Manchester Stadium. His expertise in forensic engineering has also been called upon to help assess structural damage after the catastrophic attacks on buildings in Manchester and Kenya. Steve was made a Commander of the Order of the British Empire by Her Majesty the Queen in 2009.

He is called on by the media regularly to comment on engineering issues and was featured in an IMAX film released in December 2017 entitled Dream Big: Engineering Our World, which looks retrospectively and prospectively to analyze how engineers have been shaping lives throughout history. On the small screen, Steve has been featured on television shows including Engineering the Impossible and Time Scanners, which explored ancient wonders with new technology. One of Steve’s most interesting findings was when he explored the engineering secrets of the Great Wall of China using a 3D laser-scanning drone which revealed that it was the sticky rice used in its construction that made the wall so strong and long-lasting.